Beranda » News » Usefull For All » Whether it is a colored note or a torn note, it can be easily deposited into a bank and changed

Whether it is a colored note or a torn note, it can be easily deposited into a bank and changed

Whether it is a colored note or a torn note, it can be easily deposited into a bank and changed

When playing Holi, people do not pay attention to the currency notes in their pockets, which causes the paint to fall on the notes or become dirty. Color notes are difficult to execute in the market, as most shoppers refuse to take such notes. In fact, people fear that this note will run or not. If you also have a colored note or a note has been broken, you can easily change these notes by depositing them in a bank. No bank can refuse to change these notes. However, if you are not careful about some things, your 500 and 2000 rupee notes may also be canceled. 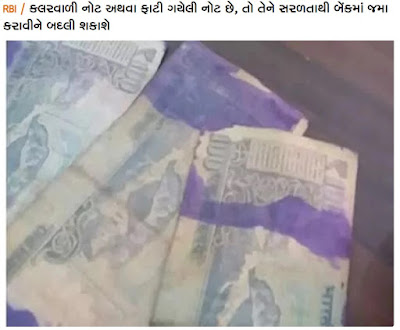 The notes you have will be brand new and original. It may have been issued by the Reserve Bank of India (RBI), but an error could have been canceled. The RBI released a circular in 2017. As mentioned in this secular, the bank can accept which notes and which do not. According to Secular, if a political slogan is written on any note, the bank of this type of note will not accept. No bank will approve it. The RBI has made it clear in its secular that such note will not be tender. That means that such a note will not be approved by any bank in the country. It will be completely canceled. No matter what its value is.

Colored notes
According to the RBI, no bank can refuse to accept colored notes. At the same time, however, the RBI has advised people not to pollute these notes.

As stated in the secular, the bank will not accept any note which has been deliberately tossed. According to the RBI, it is difficult to identify deliberately torn notes, but if one looks at the torn note, it may be revealed that it has been torn intentionally.

Note can be changed this way

Tag : News, Usefull For All