TRAI Announces New Tariff List, 200 Channels Can Be Saved From March 1 For Rs 130

TRAI Announces New Tariff List, 200 Channels Can Be Saved From March 1 For Rs 130

The Telecom Regulatory Authority of India (TRAI) has announced a new tariff list, giving cable network customers a gift in the new year. In which subscribers will now get 200 channels free for Rs 130. Earlier, 100 channels were available for free at Rs 130. This arrangement will be effective from March 1, 2020. Even TRAI has made a new change, that there will be no share of the channel book costing more than Rs 12. Companies will have to submit tariff information on the website by January 16. The rate list for all channels will be announced again on January 30. 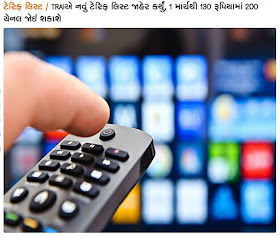 In addition, TRAI has fixed a monthly fee limit of Rs 160 for all 'free to air' channels offered by customers. Now 500 free to air channels will be available for Rs 160.


TRAI implemented a new broadcast tariff system last year. In this, viewers only have to pay for the channels they want to watch. Earlier, broadcasters provided channels in the package, so to watch favorite channels, you had to pay for some channels that you did not want to see.

When TRAI implemented the new broadcast system, it provided viewers with 100 free to air channels. It has 26 channels of television. He had to pay taxes and pay 130. In addition, the amount you pay to watch a channel of your choice has to be paid. For this, all major broadcasters have announced their own package.