Beranda » News » Usefull For All » It will be mandatory to link Aadhar and Water ID, the government is ready to implement the new rule

It will be mandatory to link Aadhar and Water ID, the government is ready to implement the new rule

It will be mandatory to link Aadhar and Water ID, the government is ready to implement the new rule

According to the Election Commission, this will help identify fake voters
According to the 2019 Lok Sabha election data, the country has an estimated 90 million water
Aadhaar cards have been created for an estimated 125 million citizens living in the country
Divyabhaskar.ComJan 25, 2020, 02:39 PM IST
Utility desk. The central government will make it mandatory to link water IDs with Aadhaar. The Law Ministry has accepted the suggestion made by the Election Commission. According to the ministry, a cabinet note is being prepared for this legislation. It will be presented to the Cabinet Committee headed by the Prime Minister. 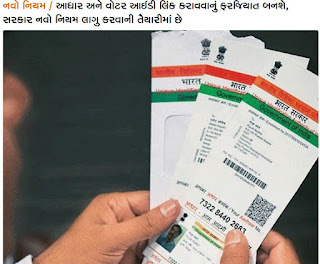 Expect to introduce a note for legislation before the budget
According to the official, it has not yet been decided by the Law Ministry as to when they will present this note in front of the Cabinet, but indicated that it may be presented before or during this budget session. According to the report, the law ministry has approved this with some conditions. With the approval of the Law Ministry, the Election Commission may have the legal right to link the water ID with the Aadhar card.

The proposal was sent last year
The Election Commission had proposed this against the government in August last year. According to it, the Representation of the People Act 1950 was amended to give the people the right to seek support and use it in water ID.

Fake voters will be banned
According to the Election Commission, this will help identify fake voters. The amendment also stated that in the event of non-issuance of Aadhaar number, no one's name will be removed from the electoral rolls nor it will be barred from giving the enrollment.

It is not mandatory to link the page number with the base
According to the Gujarat High Court, the PAN card will not be canceled even if the Aadhaar is not linked till the decision of the Supreme Court, the Income Tax Department has fixed March 31, 2020 as the deadline for linking PAN with Aadhaar. By this date, if any person's PAN card is not linked to Aadhaar, his PAN card will be canceled. According to the High Court, the validity of the Aadhaar Act is currently under consideration in the Supreme Court. There can be no decision on linking the page and the base.

Tag : News, Usefull For All