Beranda » Usefull For All » Do you know these five things about the Citizenship (Amendment) Bill 2019?

Do you know these five things about the Citizenship (Amendment) Bill 2019?

Do you know these five things about the Citizenship (Amendment) Bill 2019?

Demonstrations are being held against the new Citizenship (Amendment) Act 2019 everywhere from Delhi to Assam, from Uttar Pradesh to Bangalore-Mumbai.
This bill has been passed by the Modi government at the center, but now it is being opposed across the country. The violent protests that started in the northeastern states after the Citizenship (Amendment) Act 2019 were made, have now reached the country's capital Delhi.

While the northeastern states have concerns about their identities, other states of the country are calling this law as non-constitutional.
The Citizenship (Amendment) Act 2019, which paves the way for India's citizenship to non-Muslim minorities from three neighboring countries, has created a ruckus.
Let's know five big things related to this

Millions of people living in undivided India had been living in Pakistan and Bangladesh since 1947, from the time of independence, considering a different religion. Along with this, Afghanistan is also a Muslim nation and many people from Hindu, Sikh, Buddhist, Parsi, Jain and Christian communities in these countries suffer persecution on religious grounds.
According to the Citizenship Act 1955, no illegal immigrant citizen can get citizenship of India. The government has now decided to give Indian citizenship to the minorities easily, according to the Citizenship Act 2019, through an amendment to this law. 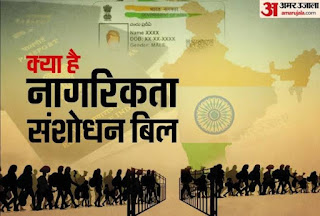 2. What does the Modi government say?
In the three neighboring countries of India, many people from Hindu, Sikh, Buddhist, Parsi, Jain and Christian communities face persecution on religious grounds. The constitution of Pakistan, Bangladesh and Afghanistan makes them uniquely religious states. Many of these people fear government harassment in everyday life
In these three countries, minorities are hindered in keeping their religious system, their adherence and faith. Many of these people came to India for asylum and now want to stay here. The visa or passport period of these people has also expired. Some people do not have any documents, but if they want to consider India as their country, then the government wants to ensure their safety.
3. What is the logic of opposition parties?
Opposition parties say that the bill discriminates against Muslims, who have not been included in it. Accordingly, it is a violation of Article 14 of the Constitution. The central government has said that Pakistan, Bangladesh and Afghanistan are Muslim nations, there are Muslim majority, due to which they cannot be considered victims of oppression on the basis of religion. The central government has assured that the government will look into the applications of other communities in different cases.
4. Why the ruckus in the northeast?
Under the new citizenship law, Hindu-Jain-Buddhist-Christian-Parsi-Sikh refugees from Bangladesh, Afghanistan, Pakistan will be easy to get citizenship of India, but the northeastern states are opposing it.
In fact, many states of the Northeast say that a large number of people of this community are still staying in their state or area, if they get citizenship now then they will become permanent. This will threaten their culture, language, food and other identity.
Some areas / states of the Northeast have been placed in the Inner Line Permit by the Central Government, due to which the citizenship law does not apply there. These include some areas of Manipur, Arunachal, Meghalaya.
5. Is there anything special in the Citizenship (Amendment) Act 2019?
The Citizenship Amendment Bill was passed in its initial stage in January 2019. In this, Indian citizenship was sought for six non-Muslim communities Hindu, Sikh, Buddhist, Jain, Parsi and Christians. In this, the necessary condition of staying in India for at least 12 years was reduced to seven years to get citizenship of India.
If a person seeking citizenship of India does not have any valid documents, then he can be given citizenship. The bill was referred to the Joint Parliamentary Committee, although the bill could not be passed because it had fallen in the Rajya Sabha.
★ CLICK HERE TO READ GUJARATI

Tag : Usefull For All