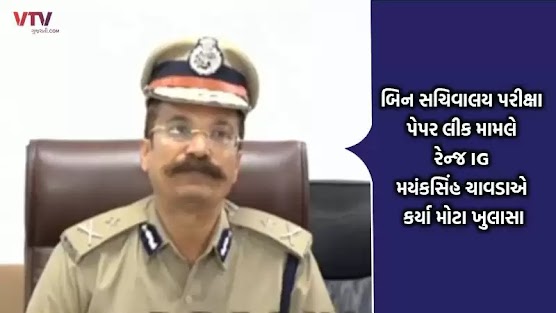 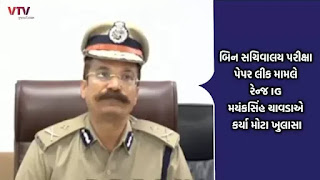 On the issue of non-secretarial examination, Chief Minister Vijay Rupani said that in case of malpractice in the examination, a thorough investigation would be carried out in depth. The government will not leave anyone who is. Then Gujarat police arrested 6 people today. The police have made a big disclosure in this regard by press conference.

The exam was canceled after malpractice in the non-secretarial examination. The matter is being investigated by the police.

Gujarat police have arrested 5 people who leaked the paper. The Gandhinagar Range IG Mayank Singh Chawapatkar Conference was organized in this regard.

Range IG Mayank Singh Chawda said that Danilimda M.S. Investigation was conducted on paperwork in high school. So far, 5 people have been arrested so far. Pravindan Gadhvi is the main source of leaks for leaking papers. Principal Vijay Singh Vaghela is involved. Photos were broken by Fakharuddin breaking the paper seal. Congress activist Lakhwinder Singh is involved in this. Apart from this, Ram Gadhvi, a resident of Palitana, Mohammed Farooq, Deepak Joshi, all of Pavinadan Gadhvi, participated in the leak of the paper from here. Police arrest 5 accused leaking paper

Police seized 11 mobiles. Mobiles were sent to FSL. Answers were circulated before the exam in WhatsApp and Telegram. The name of Pravidan Gadhvi came. Gaurav Joshi's name was exposed but it does not exist. Deepak Joshi's name was opened after investigation. A plot was staged at MS High School in Danilimda. Pravinan Gadhvi is the main source.

Vijay Singh, Principal of Danilimda School is also involved. School teacher Farooq Fakhruddin is also involved. Today's school fakruddin was cut out with paper. Farooq broke the paper seal. Farooq gave the paper to Prof. Gadhvani. Farooq Fakhruddin had reached the paper in all classes. The name of Lakhwinder Singh Congress activist was also exposed. Lakhwinder Singh distributed the paper. Vijay Singh is the principal of MS School. Farkruddin provided photos of the paper. Police have arrested 6 accused. Proceedings are under way to arrest some more accused. Nawab is a school of builders. 6 teams are searching for the accused. Also the name of accused Ram Gadhvi. Pravinan Gadhvi lives in the dock of Ahmedabad. Deepak Joshi is a resident of Anand. Currently there is no talk of any inter-state gang. Teams have been dispatched to speed up the other accused.

The report of the evidence sent to the science laboratory is awaiting. An investigation is underway on the Surendranagar issue. This is the whole disclosure based on WhatsApp screenshots. So far 30 statements have been taken. Those who have taken benefits will be prosecuted. Congress corporation is the involvement of Shahjad Pathan's uncle. Vijay Singh was approached by Pravin.

Also, the police have asked for the date on which the paper was delivered by the agency and at what time. Importantly, the Secretary of the Secondary Service Selection Board lodged a complaint at the Sector 7 Police Station.